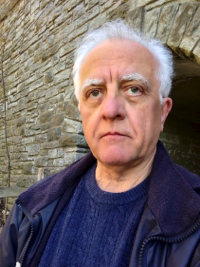 Igor Vladimirovich Plitsyn (Russian: Игорь Владимирович Плицын; born August 10, 1955, Baku, Azerbaijan) is a Russian-American composer, violinist, and pianist. He began to study violin in Baku at the age of seven and continued his music studies at Moscow Central Music School and Moscow State Tchaikovsky Conservatory, graduating from the conservatory as a violinist (class of Victor Pikaizen) and, later, as a composer (class of Alexei Nikolaev). During his conservatory years, he became a prizewinner of two All-Union Student Composers Competitions for his Konzerstück for Piano and Orchestra and Concerto for Violin and Orchestra. After graduation, he taught composition and musc theory and worked as a violinist, arranger, and keyboardist with television and radio orchestras in Baku and Moscow. In 1992, he moved to the United States and settled in Cincinnati, where he received a doctorate in composition and music theory from the University of Cincinnati College-Conservatory of Music and continued to teach.

Performers of his music included USSR Radio and Television Symphony Orchestra (BSO), USSR Radio and Television Grand Concert Orchestra, Azerbaijan State Choral Cappella, Moscow Philharmonic Orchestra, Moscow Ensemble Concertino, and CCM Ensemble for Contemporary Music, pianist Mikhail Pletnev, and violinist Alexei Bruni, among others. His choral and chamber music was published by Sovetsky Kompozitor. He was a recipient of commissions and awards from the Ministries of Culture and the Television and Radio Committees of Russia and Azerbaijan, Meet the Composer, and ASCAP. His countless arrangements of concert and popular music were broadcast by radio and television stations of the former USSR.

Plitsyn's portfolio comprises works in practically every genre, exploring a broad range of artistic expression and techniques of all representative styles of Western music. His compositional language to a considerable degree integrates jazz and world music idioms. For the last several years, he has largely been focused on producing electro-acoustic works, frequently involving improvisation and digital sound processing. His album Serenade for electric violin and synthesizer, fusing elements of blues, maqam, and the Baroque, was released on CD. American Record Guide called the album "a relaxed, airy, expansive, life-affirming celebration of the night."  Following Serenade, his Airs of Eden and The Path further explored the possibilities of electric violin and sampler, as well as formal structures organic to the possibilities of recording software. During this period, he has also become interested in ambient music, which led to the production of Chiming, Repose, and Two Faces of the Moon, aesthetically reminiscent of meditative music of the Far East.

Beyond music, Plitsyn's interests include photography and graphic design, inspiring him to create the artwork of his releases. (Unless indicated otherwise, he is the author of all images appearing on this website.) Recently, he has begun to produce works combining his music with photography and footage. His latest release Andromeda is accompanied by a sequence of NASA photographs animated and arranged in a quasi-palindrome, thus integrating musical and visual forms. More projects in a similar vein are planned for the future.